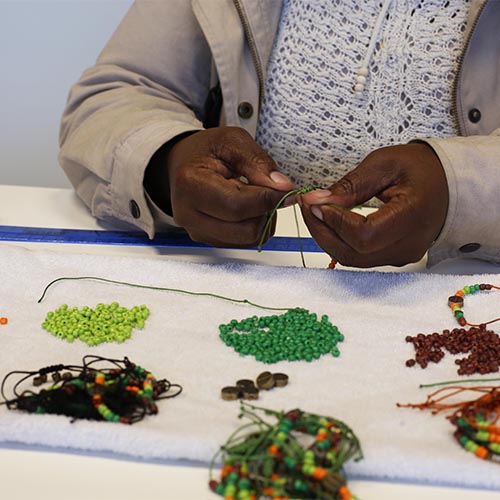 The story of Nombasa: She makes a living by making bracelets for Health Promoters

In township Khayelitsha in South Afrika lives Nombasa (18 years old). She works at the company Relate who produce the Health Promoters bracelets.

Nombasa:’’Finally I was able to worry less about my income. Everytime I go to work, I get very happy. Those bracelets are so much fun to make. At the end of the day I look at all the bracelets I made and think to myself: every single bracelet will help a person. Many people know nothing about diseases such as diabetes. Due to these bracelets many people do have access to the healtheducationworkshops. I’m very proud of that!’’

At this moment Nombasa has an steady income. That was something she coudn’t think of months ago.

‘I was kicked out and had nowhere to go.’

Nombasa gave birth to her son Juma at the age of 16. Nombasa never got any information about pregnancy. While she was pregnant, she didn’t feel well. Nombasa thought it was a part of the pregnancy. She was given a selftest at the hospital. The results were shocking: she was hiv-positive.

‘’I was very shooked by the results. To be fair, I had no idea what hiv was. I could read from the doctors face it was very serious.’

Since Nombasa’s pregnancy, Juma’s dad ran away. Juma’s dad turned out to have multiple partners. The delivery wasn’t easy, but went well. Due to the medical knowlegde, Juma was born without hiv.

After the birth of Juma, Nombasa went back to work. She got herself a very underpaid job at a restaurant. Eventhough she was underpaid, Nombasa realy liked the job.

‘’The bond you had with every customer was amazing’’ says Nombasa. ‘’My goal was to give every customer a hospitable evening. I’ve worked for quit some time until my boss found out I was hiv-positve. I was fired immediately. They thought they could get infected by talking to me. I was kicked out and had nowere to go. The only thing I could think about was Jumo. How was I going to feed him? We didn’t have much, but now we had nothing.’

‘’My son is happy and healthy without hiv.’’

‘’My son is happy and healthy without hiv. Due to the medication, but also due to the help of the Health Promoters. Besides the workshops about hiv I learned much more about personal hygiene and how to live a healthy life. That’s very important especially when you have hiv!’’ says Nombasa at the end of the interview.

What will happen to your money?

One bracelet costs €5,-. With this money we can provide women like Nombasa to follow our workshops. The women learn about the things so usual to us such as washing your hands before dinner to prevent diarrhea, but also what to do when you’re on your period and diabetes.