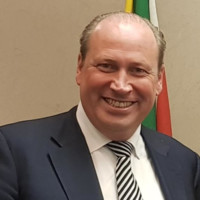 What does the organization look like currently?
Mark: “We have chosen a small Board to take a few steps for now, to keep the lines short and workable. Around this Board, committees are being formed for the bigger objectives. We have a fundraising committee, a Golf4Health committee and more committees will be set up with people whom we will introduce to our supporters in the coming months. Besides having a great Board, we can only be successful if we have someone who takes care of the daily business from the Netherlands,  liaises with all committees and has a good contact with South Africa. We have therefore decided to appoint  Mrs. Regina Eggink-Stolk, who for years was the right hand of Harold, as Executive Director in the Netherlands. Harold is irreplaceable. He had a unique mix of passion, knowledge & skills, charisma and energy, but we can join forces to continue the plans that were already there. Regina knows the organization, is familiar with the network, with all the plans that were there and even most importantly knows a lot about the organization. Regina and George Arrey (CEO in South Africa) are in almost daily contact; in this way, they feel enormously supported and they also make steps in further developments. At the moment, the team in South Africa is also making a special effort. Despite COVID-19), they are steadily continuing their work and there are only compliments for that. In Lesotho, (where the project is also found), they are also making progress and together we are on the way to setting up Health Promoters in other places. I am also very happy that the PR advisor of Harold, Patrick de Leede wants to have an active role within the organization. He will support us with PR activities and will soon be introduced to all Board members”.

Partners  in the world of NGOs is vital

After a  year, the Boards of South Africa and the Netherlands, together with Regina, met to discuss the memorandum of understanding( MOU), to redraft it and also to clarify the roles for the both entities, including a policy plan of where they both want to be in three years time. “This has to be put down on paper and that’s why we have two lawyers to assist us- Robert Frans and Hans Hueting, who make sure that all our agreements with partners, as well as the MOU and other future agreements, are clearly put down on paper.We have some good understanding with a partner of ours with whom we are about to sign a letter of intent. They want to donate a percentage of the sales of their products to the Health Promoters. The cooperation with this partner will give the organisation more resources for the beautiful work they do, and we shall in turn create some interesting opportunities for the latter so that we can grow and be successful together,” says Mr. Agterdenbosch proudly. The organization in the Netherlands wants to organize two or three ‘Golf4health’ events next year, establish two partnerships, and so, we are also working on large donation requests to other large foundations and organizations. “Yes I am really immensely proud of the club of people that is there now and the plans that are there now. It’s all in line with what the co-founder  would have liked. And slowly, we will have to set our own course further, start making history ourselves and develop new plans further”, Mak emphasized with pride!